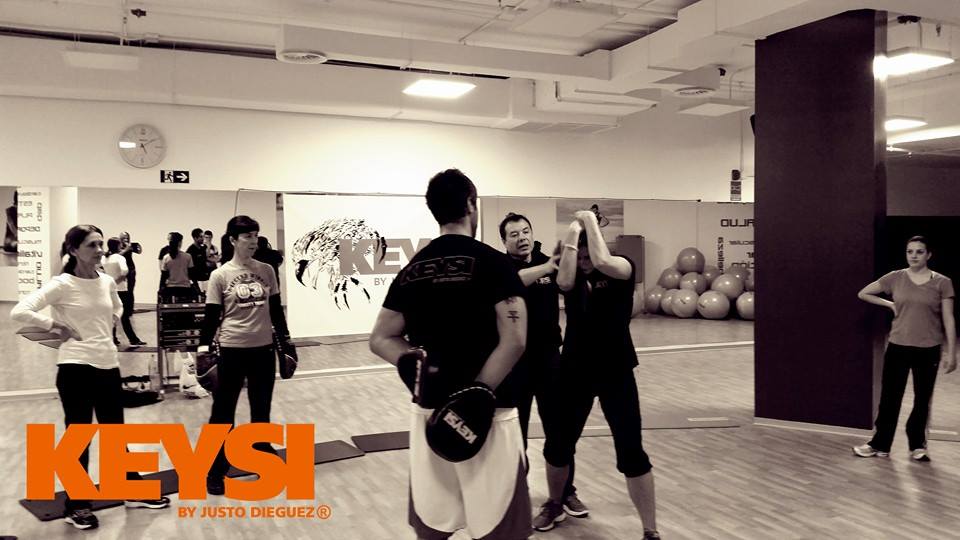 All those who are interested in martial arts or self-defence end up finding Keysi, the funny thing is that people find this method already created. But what were the first Keysi steps?

Justo Diéguez throughout his long career in martial arts shows Keysi, not through the film industry but through seminars around the world.

This is the way in which people from different nationalities and different countries became interested in the method that today is changing the mindset on how self-defence is geared to a reality that is far from what can be seen in any action movie.

Eventually Justo Diéguez began to know and meet people interested in teaching, as mentioned above, it is far from other systems or methods.

It is in places like the UK where people approached him can show pictures of the seminars received by Justo Diéguez first hand.

Given the charisma and sympathy it was inevitable that over time, these people would approach him and ask academic information, because the reality of the method itself, it will hook you from the first time you train.

Your mind hits a radical change as you will see that you don’t need to be a born athlete to learn or to teach, you only need two simple but extremely important things, dedication and effort.

In tandem through day to day working alone or with a partner you develop a sense of “honour” and “discipline”. Despite being a non-rule method these values re used as a dogma.

Over time one of the students introduced to Justo with the brilliant idea of showing Keysi even more.

Broadly speaking, a class of Keysi can be divided into two parts, the physical part which is working alone or with a partner and the intellectual part, because even being a method of self-defence, a notebook is always necessary to write down what you have learned, our own conclusions and symbolism of learning. It is in this way that a student learns to develop Keysi, from the lowest level to the highest, and this is how these students are teaching today. Through examples, explained and developed by its founder Justo Diéguez.

Alongside his former student A.N., Justo decided to give a twist to make the method known with more power. So the method spread to the world as “KFM” (Keysi Fighting Method).

It is impossible not to mention starting and evolving the company KFM was increasing in a rapid pace and the number of seminars and this method was exponentially growing.

But here, my friend, when things start to go wrong. Justo “Keysi” is its son. Keysi was born of necessity, real cruelty of a society that forced its founder to grow physically and mentally, he developed this method that allowed him, on more than one occasion, not only emerge unscathed from a critical situation but to tell the story today.

But as I said, to Justo “Keysi” is family, and its founder was unaware that his partner in the company didn’t believe in the same thing. Sadly he will never forget that for his partner “Keysi” meant nothing less than “money”, and where Justo saw students who were like family, he saw shares and people which to take advantage of, so much was his greed that he decided to call himself “founder”. But we know it is not the same to be the founder of a method to be the founder of a company, the same way as it is to work in a company than owning a company.

As you can imagine at this point, the problems were increasing. Justo was doing seminars around the world and old students converted into instructors, but because of the two ways of looking at Keysi more problems appeared for Justo. Some instructors didn’t allow any development or creativity which people who wanted to be instructors whished, aspired and wanted. That is because for them it was essential to win and feel the need of having more power forgetting what Keysi is about, family, and that nobody is better than anyone, because no one is born knowing and through work and sacrifice we all improve day by day.

With these kind of events, Justo started to feel and observe how what he created and put so much effort in was heading into a decline which he had ever imagine, but the problems had just begun.

The instructors in charge of the training of the students in Spain who knew Keysi in a more precise and intimate way from their first steps forgot the base of itself. In the end it ended in a complete separation and closure of the company KFM, leaving its founder with his soul in a fist and pain which only a father can feel when he can see what they have done to his child. Because those people who he included them until the last minute, he believed and respected was proved to be the opposite.

But Justo far from surrendering decided to start from scratch, he decided to return to their origins and then appeared “Keysi” a phoenix renewed and stronger than before, as one of the first things you learn in Keysi is to “never give up” whatever happens, keep going.

Today these former students decided to go their own way and teach what Justo instilled from the heart and put their own name to it, thanks to them more and more people are interested in Keysi, because even people who don’t know about the method, as soon as they learn its origins they will ask the correct question: Where does this which I’m learning come from? Day by day more and more emails and phone calls requesting information about Justos and where it can be learned.

And this, my friend, is the reality of why KFM (Keysi Fighting Method) disappeared and today is known only by Keysi by Justo Diéguez or just Keysi, because if you learn a derivative of Keysi method you end up wanting to know more about Keysi, and because when you finish a lesson of Keysi or derivative born from the disunity of Keysi you will be applauding his creator: Justo Diéguez.