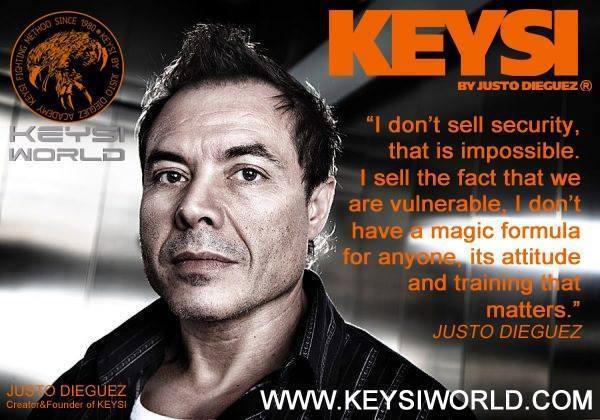 When the viewer is glued to his seat watching fight scenes attached to a fast-paced action which is drawn in perfect harmony within the fighting scenography, we can say without worries of contradiction that behind the scene, the person or known actor is the advice from Diéguez, delivering his developments and knowledge to the protagonist who needs it.

Justo learned that the art of fight is born from the everyday survival and if it’s studied and handled constantly, it becomes an effective discipline, fast and accurate which can save us from a real life dangerous situation o simply become a scene of singular beauty where the body language with their actions set the tone of a skilful aesthetic figure controlled and model drawings of the art of fighting in the most strictest sense.

Within his extensive film experience we highlight its beginnings to international cinema. In 2004 he joined the team of Paul Morris Jenning, one of the most prestigious coordinators and directors of Hollywood film industry. The next year he participated in the film Munich, directed by Steven Spielberg. From 2006 he collaborated in “Mission Impossible 3” directed by JJ Abrams, fully entering in the American film industry. In 2008 collaborating in “Batman: The Dark Knight” directed by D. Christopher Nolan and in the same year working alongside director Marc Foster in the film “James Bond 007 Quantum of Solace”.

Recently he participated in “Clash of the titans” Directed by Louis Leterrier and “Game of Thrones” directed by Brian Kirk in 2010. And in 2011 he worked to complete the series of “Clash of the Titans 2”.

Finally, his participation was also huge in the Spanish film industry working in a numerous projects and documentaries, which shows his extensive background in the world of film and in the staging of the fight of the Seventh art.